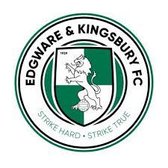 With this match having been moved from Silver Jubilee Park late in the week, Staines found themselves travelling to this overcast and rather less high-profile ground in Hertfordshire to open their Middlesex Intermediate Cup campaign. The opponents were the Reserve side of recently renamed Edgware & Kingsbury FC, currently at the foot of Herts County Senior League Division 1 [step 8].

Despite having to adjust for several unavailabilities, Paul Burgess saw his side race into a two goal lead within 9 minutes, which they never looked likely to surrender. Marshall’s 5th minute free kick from outside the box was sent goalwards by Hieke, and although it was well saved, Josh Leeks followed up to score the rebound. Leeks quickly made it 2-0 with a left-footed strike from another Marshall ball, van Walsum getting a hand to it but being unable to keep it out. Although the game was a little niggly at times, the only yellow card came on 22 minutes for Gerrard’s foul on Leeks. The home side slowly started to gel, and Gant drew a fine save from Kennedy, only for Staines to counter, Gwynne-Porter’s towering header testing van Walsum.

Edgware had a good spell at the start of the second period, two audacious long shots flying just wide. Bond came off the bench and within 4 minutes saw a 35 yard shot tipped over the bar, and from closer range L Halsey forced van Walsum to save with his legs. The decisive third goal came on 76 minutes, Gwynne-Porter heading on a Ross corner, and Josh Hieke forced it home. Van Walsum again used his fists to good effect to punch a Hooks shot over, and in stoppage time M Manzi headed just over at the other end. Staines therefore progress to the Quarter-finals of this, their primary county cup competition.

Elsewhere, AFC Cubo’s league win at Horsley bumped Staines down to 2nd place, but with games in hand.